What are the Necessary Features & Applications of a Rapid Mixer Granulator?

A High-shear Granulator is a machine that shatters lumps formed in products while wet mixing. Its side discharge outlet is perfectly matched to the profile of the intervening bowl. The high-speed Granulator features a swivel-type cylinder housing and is equipped with safety interlocks at the discharge valve and top lid. It can be used in any industry to grind a variety of products.

A high-shear granulator is a specialized granulator for a variety of materials. The high-shear action of these machines can agglomerate powders to create a consistent and uniform granule size, while minimizing the creation of process dust. However, high-shear granulators also have certain disadvantages, including limited operating conditions, irregular binder liquid distribution, and large lumps.

The rapid mixer granulator (RMG) is a type of high-shear mixer that pulverizes dry, sticky ingredients into small pieces. Unlike conventional granulators, RMGs don't encourage mass growth or compactness. Instead, they break and chop particles, making the granulation process easy and quick. The speed of the chopper, which typically ranges between 12400 and 2000 rpm or more, determines the size of particles produced.

The RMG incorporates an air purging system to prevent cross contamination. This system consists of a filter, a pressure gauge, and pipes and pneumatic fittings. The machine is equipped with a control panel, which features a timer, indicators, and a discharge opening. When processing, the machine has an impeller that sets the mixture into a tumbling motion, resulting in an even distribution of dry granules. 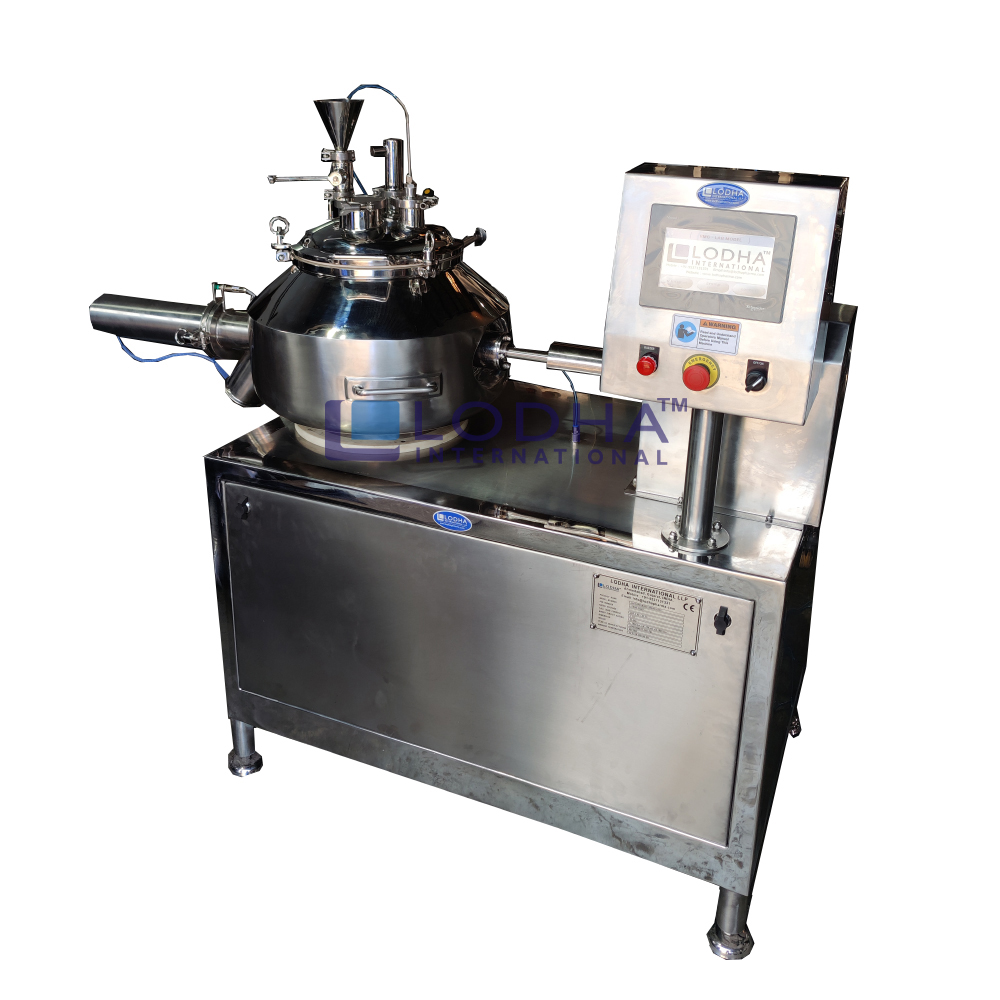 The Vacuum transfer system for Rapid Mixer Granulator is designed for a variety of pharmaceutical applications, including the manufacture of a variety of dosage forms, powders, and liquids. It is a versatile system that combines vacuum charging into a high-shear granulator with gravity-displacement fluid bed through a dry mill. In addition, the system can be configured to either dry or granulate.

The rapid mixer granulator is a unique piece of equipment that is specially designed to ensure quick distribution and even wetting of dry components. It has two major factors that determine its performance: the speed at which the components are mixed and the uniformity of the blended products. The granulator comes in several models, including oscillating and mini models. The granulator is manufactured by reputed vendors and is marked at the most reasonable rates.

The design of a rapid mixer granulator is based on the type of product it is used for. A three-blade impeller requires high rotational speed but may cause thermal stress. On the other hand, two-blade impellers are characterized by elongated side wings that ensure rapid mixing even at lower rotational speeds. The design of a high-shear mixer granulator also depends on its position and design. The position of the chopper and the amount of granules produced must be uniform and robust.

The application of a Rapid Mixer Granulator is vast, from food to pharmaceuticals. The machine has the ability to reduce batch times and increase consistency. It can measure granule size and uniformity, and has a low profile that facilitates easy cleaning. With the help of an MMI, the user can monitor granulation parameters and control product quality. And, the machine is easy to maintain, since it has a removable mixing tool that can be cleaned without dismantling the machine.

The Rapid Mixer Granulator is a mechanical granulator that can process dry or wet powder into granules in a relatively short time. This machine achieves uniform granulation with a lower level of friability, which reduces drug dust exposure. And, unlike other granulators, the granules produced by this machine have a smooth, uniform particle size distribution. It also minimizes worker exposure to drug dust and maximizes productivity. The main factors that affect the efficiency of the Rapid Mixer Granulator include the load of the granulator bowl, the impeller speed, and the wet massing tire.